For the past many years I have had an interest...no, make that a fascination with herbs, spices and seasonings. - About how they were used by our ancestors centuries ago for a variety of ailments, and how they are used today to enhance your favorite recipe.With this in mind I am attempting to present a different herb, spice or seasoning  for each day of the  A-Z Challenge. Please drop by often and perhaps we both will learn something new.Learn more about these terms

"W" is for White Pepper

I did not have a lot of options for "W" so this is sort of a "buy one-get one " deal. Since both are from the same plant I went for the "W" option and will learn about.....

The world's most popular spice, a berry grown in grapelike clusters on the pepper plant (a climbing vine native to India and Indonesia. The berry is processed to produce three basic types: black, white, and green. Black is the most common; when picken the berry is not quite ripe, then dried until it shrivels and the skin turns dark brown to black. Black is the strongest (slightly hot with a hint of sweetness) flavor of the three. Tellicherry and Lampong are among the best black peppercorns. White peppercorn, less pungent, has been allowed to ripen, then the skin is removed and the berry dried. White peppercorns are smaller, have a smoother skin and a light-tan color with a milder flavor. The green peppercon is the soft, underripe berry that is usually preserved in brine. It has a fresh flavor that is less pungent than the berry in its other forms.

Ground white pepper is sometimes used in Chinese cooking or in dishes like salad, light-coloured sauces or mashed potatoes, where black pepper would visibly stand out. White pepper has a slightly different flavour from black pepper due to the lack of certain compounds which are present in the outer fruit layer of the drupe( berry) but are not found in the seed. 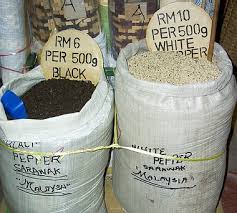 Based on secondary sources, in traditional Chinese medicine (TCM), white pepper is thought to have warming properties and is used for joint pain and stiffness (from conditions such as arthritis or carpal tunnel syndrome), dyspepsia, nausea, malaria, cholera, cancer, food poisoning, dysentery and gonorrhea. White pepper has also been applied topically to relieve pain. Based on secondary sources, in moxibustion techniques, white pepper is mixed with flour to make a paste and applied over the acupuncture point, then covered with a moxa cone and ignited. (ouch... that has GOT to hurt!)

King's American Dispensatory (1898) reportedly describes use of a topical cataplasm containing equal parts of vervain,( a perennial flower found in England) senna and white pepper mixed together with egg whites for "promoting the absorption of the blood effused in bruises." Topically, white pepper essential oil is used for treatment of pain, such as from muscular aches, sprains, osteoporosis, rheumatism and arthritis.