Gotta love Fridays....   When I was young (er)  Friday meant the week-end was here and time away from studying.When I was married and  the children were in school, it meant that I could be less organized for the next two days. As a "working gal" my shifts often require me to work every second week-end, therefore Fridays  were the harbinger of either another day on the job or ...yeah!!... my week-end off!!!Now, however, Friday means I can rant  about any and all subjects that pique my interest. 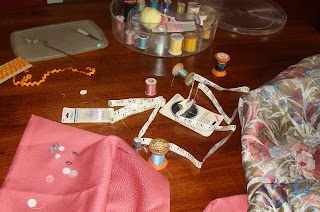 The topic today is The Lost Art of Sewing.


When I was in Intermediate School... now referred to as Middle School...taking a Home Economics class was compulsory. Here under the tutelage of some patient and kind soul, we were made aware of how little we actually knew about "being a home maker". I know, it makes me  tremble with anger at the sexist attitudes of the time, but it was acceptable then and that's where I was!
Here, in the pseudo home like atmosphere, we were instructed how to read a pattern ( I bet you didn't know they COULD be read!!) the difference between a rough edge and a salvage edge ( like anyone really cares now) and the correct stitches to use for each type of sewing that was done ..... now get this.... BY HAND!!
Yes, we actually did sew  parts of  items without the use of a machine. There was the straight stitch,  self explanatory., the overcast stitch ( this refers to going "over" the edge of material to finish it... not a reference to  cloud covering!), the ever wonderful blanket stitch used to  prevent edges from unraveling  and the all time fun maker was the button hole stitch!! This tiny group of even tinier stitches were around the cut in the material that facilitated the entry of .... you guessed it... a button!! Now in order to make a passing grade one had to not only complete these  draconian tasks they had to meet with the approval of the aforesaid  ?kind, and ? patient teacher!!!

After somehow getting through that we were  "allowed"  to use the sewing machines, which had their  own set of stitch types that were on a handy dandy dial on the machine!!! Pretty much the only requisite for completion of this part of the class was not sewing ones finger to the fabric!!Oh yes, that and having all the "right sides" of the fabric together. 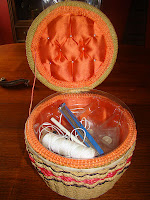 Despite all odds, and perhaps more so, because my wonderful mother and grandmother were accomplished seamstresses, I managed to survive the  class and went on to make  a few "jumper" dresses ( the easiest of all) for my  2 daughters. At the time I was very pleased with myself, but learned later of their  humiliation  at being subjected to such fashion torture!.

Now perhaps I understand that the art of sewing.... and indeed to those who do it with such passion it is an expression of themselves and a true art.... has not been lost, rather it has been gleefully abandoned!  Instead, one can  buy  a new outfit each season for less money and hassle and not risk life long injury to pride or fingers.I think the feeling of accomplishment is not the same, but the the price of "time" and "effort" appears too high in these times of restraint.


The basket (above) was given to me, as a wedding shower gift, by a very dear friend . Although I still have it (obviously) it suffers from extreme lack of use.


The Singer sewing machine (right) is one like that used by my mother to make countless  dresses, including those used in all her daughters' weddings!
Posted by Unknown at 4:00 am 6 comments: