When contemplating something "frivolous" for this Friday's post, I was standing in my kitchen talking to  one of my granddaughters when she asked what was in the bowl on the table. My answer was "Oh, honey, they are gourds".  A  conversation ensued but the Readers Digest  version is something like this.

Gourds are pretty much useless pieces of fruit/vegetable that are primarily used for display . I checked them out on "Google".
I have known what gourds are for more than 40 years but not until this evening did I realize that they have been around for more than 10,000 years. They were pretty much useless then as well, except as ornamentation, or they could be hollowed out and used as a utensil or a  musical instrument!!! (Have you ever heard anyone play a "gourd"!?)

It totally amazes me that with all the changes that have occurred in the last 10,000 years we, as humans, are still growing useless vegetation, and we still are using them as fall decoration.
Just think about it......waaaayy back  to 8,ooo BC , and picture a couple ( cave man and his cave woman) trotting off to the local forest to pick up their groceries for the winter. Here 's the list:

-1 mammoth -to be freeze dried  for meals for the winter 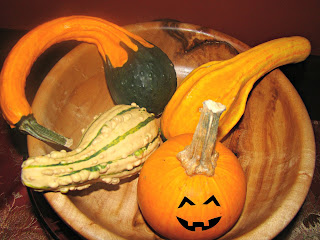 -several bushes of berries- to last the "snow season" aka winter
-locate ice-hole  for supply of water....

Oh, yes, don't forget to pick up some "gourds" to decorate the cave table!!