According to Wikipedia, in the Chinese philosophy the concept on yin-yang is used to describe how seemingly opposite or contrary forces  are interconnected and interdependent in the natural world.
Yin and yang can also be viewed as complementary and not opposing forces, interacting to form a dynamic system in which the whole is greater than the parts.

Whew!! Way too much thought and cerebral exercise for this chick!!

However, the words are what came to mind recently. Here's how it happened...
There was a planned family gathering this week  and my daughter and two granddaughters would be unable to attend. No problem... we all have places to go and things to do.  They did ask,though, if we were stopping by on Sunday as we usually do to visit them. With this in mind they had made a cake. Now, picture this, if you will.Three women ( alright, females) in the same kitchen and  there are bound to be "issues". One will not eat chocolate the other loves it and their Mum... well you can see the dilemma she was in. Being a wise woman( did I mention she is my daughter!!) she sought to placate both children. The girls then worked together with this result. 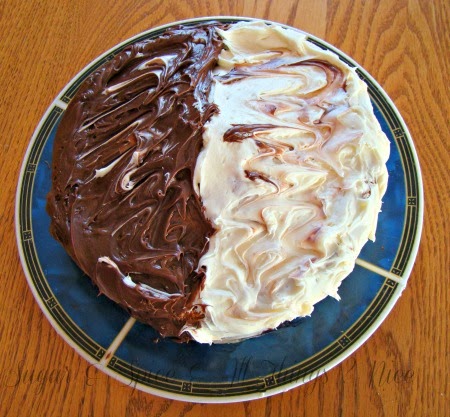 This was a big surprise to us as Mum and the girls have hectic schedules and this was not expected.
I have to say that it not only looked great, it was totally scrumptious!!!  I love how they mixed a bit of the vanilla with the chocolate icing and vice versa. Although it  was not planned, it did have a  "yin yang" effect.

When I stopped to think about it there was a lot in common with the Yin-Yang philosophy. Young women and old(er), introverts and extroverts, likes and dislikes who worked together to surprise and honour  their  parents/grandparents

A job well done and very much appreciated.!!