Times they are a changing.....or not! A Halloween Perspective.


Like many folks in Canada and the United States, I have been doing a bit of decorating for the Halloween season that is almost upon us. I do this primarily for our grandchildren, as they seem to get a kick out of it!

Years ago Hallowe'en (which is how I learned to spell it) was almost a non-event. In the evening of the 31st  we got dressed up in something that was found around the house or purchased very inexpensively (ok, cheaply). A ghost was an old white sheet that had eyes cut in it and one stumbled from door to door and said "trick or treat".  If there happened to be an old plaid flannel shirt around we donned that,  grabbed a long stick ( found nearby under a tree) tied a handkerchief. aka hanky, around it and Poof! one was  a "hobo".
Today, a very elaborate costume is purchased at a "Halloween Store".... can you believe it? Also, it seems that more and more adults are enjoying the event. To all of this I say "great"! Generally harmless fun on all levels. Real fun is often hard to come by so by all means go for it! 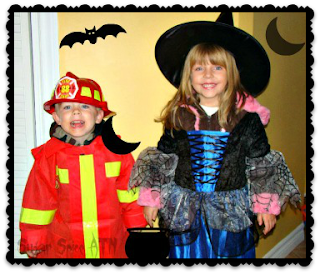 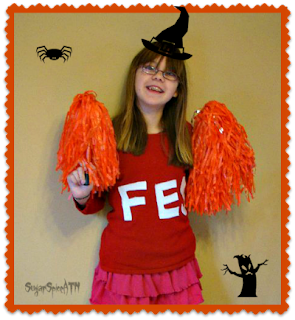 Now, here is another story, but still with the same Halloween theme.  As I said in the beginning, I was decorating and decided to put a very old cookie jar on a table that depicted a old rhyme. 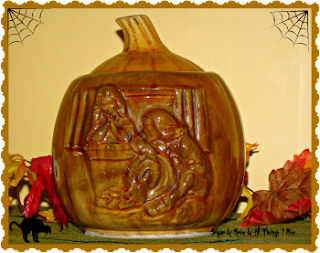 For those of you who remember Nursery Rhymes, there was one about a certain guy named Peter who put his "wife" in a pumpkin to "keep her well". I've heard that rhyme many times as a child and took it for what it was. A cute jingle, and not an accurate portrayal of events. It was of the same genre as "Hey diddle,diddle, the cat and the fiddle, the cow jumped over the moon" We knew it was not fact but it was "fun" and it rhymed!!Nothing more, nothing less!

Fast forward about 50 years... (omg,really!)... after explaining the decoration to my granddaughter she said in all sincerity.." Nana, that's just not right! That's abusive behavior"! Picture my exuberant smile and inflated mood, popping like a birthday balloon! What do I say now??

Is it a "sign of the times"??? Keep in mind these are the same kids that watch zombies and living dead movies  and have that in perspective, what happened to the good old Nursery Rhymes? Oh, for those of  you who don't know the rhyme it goes like this:

Peter,Peter, Pumpkin Eater
Had a wife, but couldn't keep her
Put her in a pumpkin shell
There he kept her, very well.

Hmmm, actually seeing this in print....now as a mature adult... it is rather scary! BUT,people, it is just a nursery rhyme!!!

Would love to know what your thoughts are on this.