Hard to believe it is that time of the year again. I'm not talking about the weather, it's the "decorating the house" time.   You would think that after all these years of marriage we would have the whole dig-out-the boxes, pick out what you want, check that the lights still work thing down to a science. But in reality......NOT!! 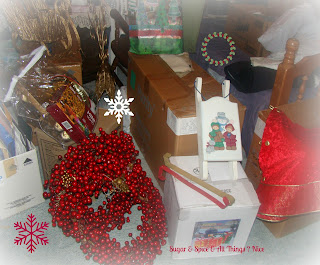 It may help to bear in mind that we have been doing this every year for the past...hmmm , large number...of years, which makes us also a "large number" of years older!! Perhaps this is one of those inversely  proportional events. The longer we have been doing a task, the older we get and the more difficult is seems. This should not be the case, but in fact it is..... Let me give you a typical scenario.

Several large boxes are laboriously dragged out from the back of a closet where they were painstakingly placed 10.5 months ago. Said boxes are then left in a room while we make the  difficult decision of which day we will put ourselves through the  spiderman- like routine that is required to assemble an array of multi-colored lights from roof to deck.

This would probably be a good time to say that my husband is terrified of heights!! Suffice to say that the top of a 6 foot ladder is considered a "height" by some people.... including him. Also, he has a stubborn streak and an unreasonable sense of pride that precludes him from holding a ladder so I can climb up it. Instead he insists of climbing the ladder while I hold it.....thankfully he did not need to test my ability to hold the ladder and him in an upright position!!!
What he did need, however, was to call in to play my 25 years of experience as a nurse! While stapling the strings of lights to the house, he, in his fear of falling managed to put a staple completely through his finger!!! This was my cue to come dashing to the scene, band-aids in hand, and  save the day.....O.K., so  I didn't save the day, but I have to admit the bandage was skillfully applied!!

At the end of the day, literally, the lights were in place, all was well for another year of Christmas decorating on the  OUTSIDE of the house!!