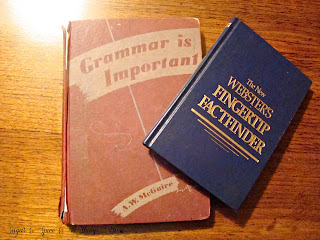 This  is a series that  will appear on the Frivolous Friday slot for the next little while, in bi-weekly increments ( or fortnightly if you are from Britain). Although it is very basic grammar, most of it  I learned while in junior high school.... now called middle school and the presentation reflects that age group.
I am not a teacher, not do I have any idea what is or is not taught in the system today. It is just an idea that presented itself when I came across a grammar text ( see Oct.5/12) that was used in the schools "in my day".  I am hoping to refresh my memory and maybe even relearn a few things, but mostly I am going to make the effort to keep it, light, informative and above all, fun and humorous.  Hope you enjoy.

In the first installment of the series, nouns were discussed, along with the "groupies" or "wanna-be"nouns!   These words formed the Subject of a sentence. The words that describe what the subject does are referred to as action words, or verbs, and form the Predicate of a sentence.

Two words...I am... is a complete sentence.  "I" is a pronoun and the subject of the verb "am".( first person singular of the verb "to be") "am" is the predicate.  FYI... verbs are usually referred to in their infinitive form. Examples " to read, to sleep, ( hey, that happens some time!) to imagine, or in the case of the verb am, the infinitive is "to be"...
I realize that this is, as I stated previously, very basic, but a necessary foundation.

The change in the form of a verb to show a change in time is called tense.
When we give the tense forms of a verb with the first, second, and third person pronouns, we conjugate the verb.
As an example  let's use the verb "know"

Future Tense is pretty much the same with   the following changes. First person singular and plural use the word "shall' instead of "will"


Before I lose you entirely and you go hopping off to some other blog with tasty  recipes, just check this next one out and I will hop along with you ...... :-)

When a verb indicates an action which has been completed in a time very close to the present, and the auxiliaries "have and "has" are used with the principal verb  it is called the  Present Perfect Tense.
Similarly,  there is a Past Perfect and Future Perfect Tense. 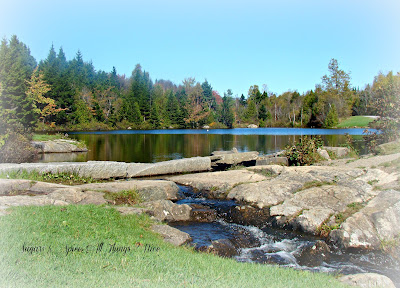 
Present, Past or Future, you won't be tense in this  restful setting. It is  part of  beautiful Rockwood Park where I have enjoyed many Nature Trails.


Credits---
Grammar is Important    A basic course for Canadian Schools by A.W. McGuire,B.A.   This particular edition was first published in Canada in 1949, and in the U.S. in 1950. The eighth edition ( the one pictured above) was published in 1957.