Anatomy of a Yard Sale


Along with earlier sunrises and warmer temperatures in Atlantic Canada, Saturdays are special to a breed of natives known as "Yard Salers" Although generally a quiet and docile animal, they have been known to exhibit unusually contentious behavior if  sale signs are not to their liking or if challenged in any way by others of their species.

There are certain traits that distinguish  them from the run of the mill people who just wander into a yard sale out of curiosity. Most notably, they arrive, park where they stop, and begin a ritualistic assessment of the wares on display.  They can be seen with a coffee cup in  hand as they purposefully mingle with others of their ilk. Most will nod or smile in the direction of the "Seller".This is also known as Posturing. It gives the impression of kinship and increases their chances of getting a better deal when, and if, haggling occurs. These finely tuned ceremonies are part and parcel of what makes a Saturday morning Yard Sale so much fun, whether you are selling, or one of the "Salers"(not to be confused with the east coast "Sailors"). I have been an active participant in both categories and also enjoy being part of the rarer breed known as the "Casual Observer"!

On this particular day I played the role of all three characters, with the emphasis on selling. The goal was to raise funds for JDRF- Juvenile Diabetes Research Foundation- with the goal of improving the lives of everyone with Type 1 Diabetes. 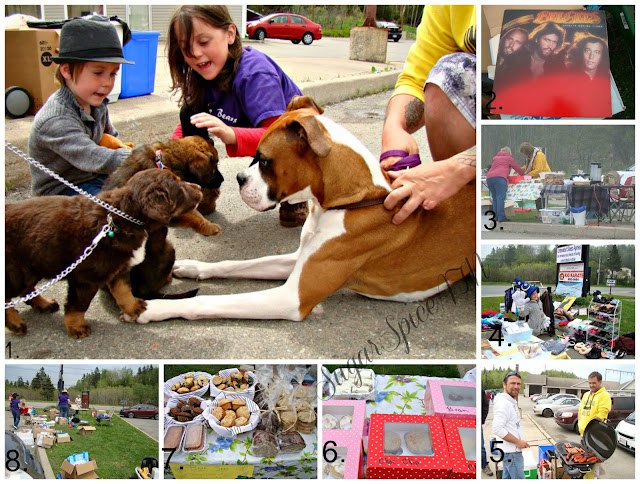 1.The two puppies don't appear the least intimidated by their 7 month old larger friend. After some initial playing they settled down and pretty  much saw eye to eye on most topics!

2.No self-respecting yard sale would be replete without it's share of LPs and what better  represents this than this classic  Bee Gees album. ( A definite draw for real "Salers")

3.Last minute preparations before the crowds of "Salers" arrive! Fog and cool temps did not deter these enthusiastic individuals.

4.This sweet little Sorceress was happy to greet arrivals. Something for everyone!

5.Who would have thought that hot dogs and sausages would be such a great hit at 9:00 am? The efficient and energetic  cook did very well to keep up with the huge demand.

6 & 7. Home made goodies always draw a crowd and these delights were no exception. I know they were still warm from the oven and my super sisters will not disagree with me. They were cooking at 4:00 am to make sure the muffins, cookies and squares were as fresh as could be!!

8.All good things must come to an end but as we cleaned up we were pleased that a sizable donation was made to JDRF and the Canadian Diabetes Association.


Enjoy yourself and have a great week! ;-)