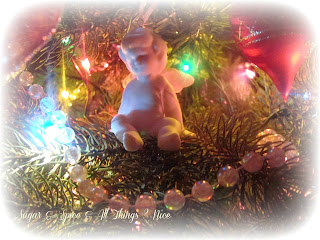 Many times the highlight of my Christmas has been an experience that was totally unpredictable.  These experiences  were not, in and of themselves, earth shattering or remarkable in any way.  They were simple events that because of their timing and meaningfulness to me made them part of what I refer to as Christmas Magic.

An example of such an event was this.  Several years ago after  a harrowing week of work and dealing with some particularly intense  situations with a patient in an ICU, I was approached on Christmas Eve , in church or all places, by this patients family and thanked in a most heartfelt  and demonstrative manner. This left me humbled, very happy, and gave me a sense of the true meaning of Christmas.

Another  event occurred this week. It involved 3 ornaments. One, a very old Christmas tree ornament that my mother put on her tree when she was alive. The second is a tiny white cherub  that was part of a funeral arrangement sent for our grandson who died on a night that  had just started to snow, 2 years ago this week, and the third is a rather non nondescript  "store-bought" variety.

Needless to say, there were more than a few tears shed when the first two, and especially the second, were carefully secured to their respective branches. But, I dried my tears , took a deep breath and moved on with the task at hand, wanting to get the tree decorated and the resulting chaos in the living room cleaned up before anyone  came to visit.  After what seemed like an endless job, the garlands were hung, the ribbons properly  draped( how do you "properly" drape  a ribbon) on the tree and the decoration - box was empty! Oh, yes, not to forget the main attraction on a Christmas tree, ...the lights!! My hubby is in charge of light placement and does a great job!

Now was the time to step back, and with a glass of eggnog in hand admire and/or critique our tree. During this process I happened to notice that only one ornament was still moving, ever so slightly,on the tree. Being tired and hungry I dismissed it and went about having my supper. As often happens I dozed off for a bit and when I got up, returned to finish cleaning up the colorful debris, I was amazed that the same ornament was still moving..... keep in mind it had been about 2 hours since it was hung on the tree. All the rest of the decorations were as still as church mice, .......except for the third ornament, which now was also slightly tremulous, not as much as the first, but after close observation one could indeed detect movement!!!

Perhaps it was a slight draught, you say, or maybe the was the way in which it was suspended on the branch ( with a hook like all the rest), and you may indeed be correct. But TODAY, 6 days after they were hung on the tree, both ornaments still are the ONLY  thing moving on that tree. Now, you may have guessed that the first ornament, from my Mum's tree, was the "mover" in this scenario, followed closely by the third decoration.

My heart tells me one thing but my mind tells me another.But in the words of my daughter, "tell your mind to 'butt out', it has no place in a Christmas Story".  Oh,... did I mention that the third ornament was a snowflake??!! 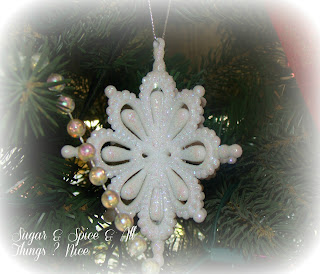